The Mass Effect planet exploration gameplay evolved greatly from the original game, until the last sequel. This article reviews the approaches to planet exploration in each of the 3 games, and studies how each would influence the player’s behaviors and enjoyment of the feature. 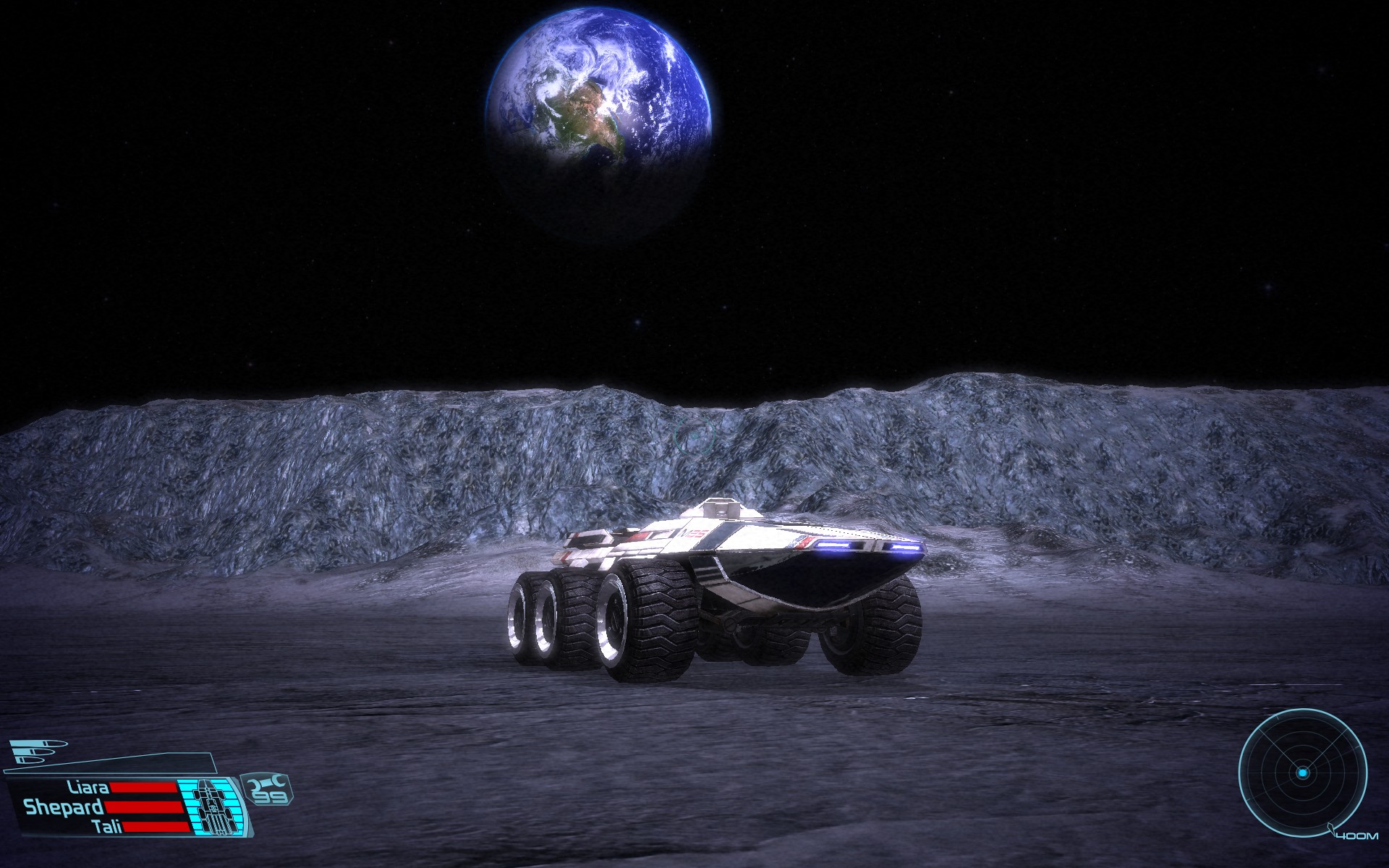 In Mass Effect 1, exploring space implied landing on planets. The players got to use a vehicle called the Mako, and drive to 5 or 6 points of interest to salvage ressources or have some action. The map also contained unmarked rare ressources to discover. These hidden ressources, very hard to find, are the real reward for exploring thoroughly. To make this a little less time consuming, more ressources exist than you need to find to complete the goal.

Using this system, players set up a couple of strategies, shared online to help each other. One of the most efficient strategies appears to be to follow the edge of the map. Users come across most markers and hidden ressources. If any are left after the went around the map once, then move to remaining points towards the center, but it is usually not necessary.

Players really liked driving the Mako, feeling like real explorers, despite some control issues. However, while action scenes and salvaging is considered fun, a lot of the exploration time is spent driving around empty surfaces. Over time, the player also realises most of the buildings to explore have the same layout, and action scenes quickly become repeptitive and boring when doing this for a while.

No more driving around for hours in Mass Effect 2 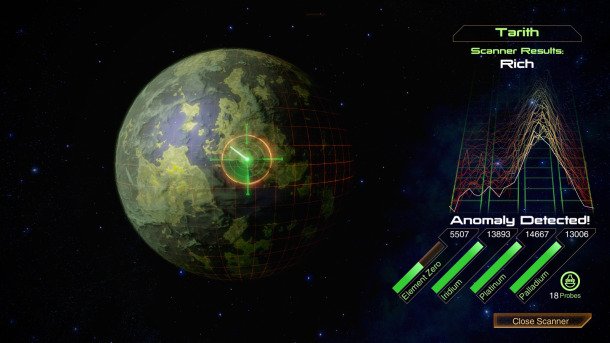 In Mass Effect 2, exploration has been modified deeply. This time, the player needs to scan planets and observe results of the scan to determine whether there are ressources to gather, which type, and in what quantity it is available ? If the player wants to gather it, he has to mark the spot by launching a probe and he will recieve an amount of that ressource which will allow the player to build unique character and ship upgrades. This replaces salvaging parts the player encountered in ME1 when driving around the surface.

Actions scenes are also present. Upon arrival on a planet, the player will be warned there is an ‘anomaly’ detected. The scanner will let him find the source of this anomaly, as part of a side quest. When a probe is launched, the player will be able to land at that spot and do a side quest. These are all unique, and interesting to perform – sometimes including small side stories made of a sequence of side quests.

Scanning is done by slowly moving a small cursor around the surface of a planet, then sending a probe to mark the spot. Probes are limited in number and need to be bought frequently.

While looking for the source of an anomaly is fun, scanning whole planets for ressources quickly get tedious.

How do players scan for ressources ?

At first, players will scan planets nearby, when they move on with the main quest. As soon as they have understood the benefits of the ressources and unlocked upgrades, they tend to alternate between long phases where they progress in the story, and long phases where they try to explore a lot of the galaxy and gather mounds of ressources to buy all the available upgrades.

The maximum value of gauges tend to limit that at first, but some upgrades cost more than the value a gauge appears full. They players understand they can gather unlimited ressources, and will spend boring hours scanning for ressources.

When scanning their first planets, users tend to scan randomly and gather what they find by accident. Later, they are more likely to scan full planets thoroughly either circling around it and moving up and down to cover the whole surface, or scanning vertical strips while rotating the planet. The scanning is slow and more advanced players will likely flash the scanner to be able to move faster across the surface of the planet, and regularly scan samples, only scanning for longer periods when detecting hat could be a lareg deposit of ressources.

The same way, players will be more selective over time regarding what deposits to gather by sending a probe, and which to leave behind. At first, players with very little ressources will use all of their probes on one planet scan. over time, they will gather only very large deposits, or deposits of ressources they currently need, or that are rare (like element zero).

While looking for the source of an anomaly is fun, lengthy sessions to scan planets throughout quickly becomes repetitive and tedious. This is particularly true when the player is out trying to reach an amount of a certain ressource, to get a specific upgrade.

First of all, when starting up Mass Effect 3, the player recieves an extra reward for his tedious scanning in the second game. This first positive impression is a pleasant surprise to players who spent long hours scanning for ressources. 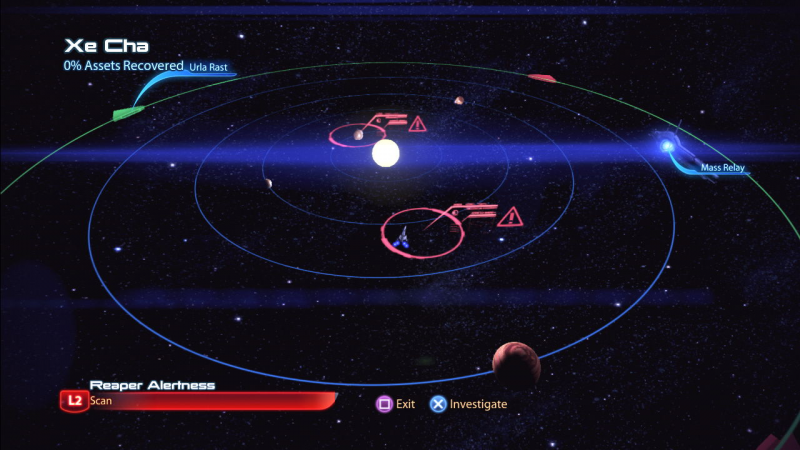 Just like in Mass Effect 2, these anomalies then need to be located on the surface of the planet, by following a direction given by the scanner. Scanning is still slow, but there is only one target to find, and aproximate directions are given to the player. This makes scanning a whole lot easier. This is compensated by the fact the player is under pressure from ennemies during that time.

In Mass Effect 3, scanning doesn’t only let players locate ressources, it also reveals their position to ennemies, who then come swaming over the star system, and threaten the player. This means he has little time to find the target on the planet, or forces him to seperate sequences where he locates ressources, from those where he actually gathers the ressources.

Ennemies only disappear again after the player progressed on quests. This means the player forces the player not to spend countless hours scanning. That’s great, because the scanning itself never was boring : its scanning for extended periods of time that’s tedious – and while it’s tedious, the players naturally tend to do it anyway.

The challenge in this case is not only based on reading scanner results, but upon skill in scanning areas successfully before and while ennemies are in an area, and memory of said area in the next round, when nothing was found the first time.

Mass effect’s evolution of exploration system shows us an example where developpers improved the player experience from exploration on foot in a dune-like atmosphere, immersive but long, tedious and costly to make sufficiently varied in gameplay – towards a most fun and balanced system.