In this tutorial, I’ll explain how to add a door in a scene and make it interactive using the Shadowrun Hong Kong level editor. We’ll have a look at the options specific to doors using the basic interactions menu.

Adding a door to the map

In Shadowrun Hong Kong (and earlier versions aswell), doors are composed of three pieces. The front is the largest and will be closest to the player. The Back is a small piece of wall that has a designed thickness, since it will be visible behind the door. The door itself is the middle part, which fits perfectly between the front and back. This middle piece is the one we want to open and close. 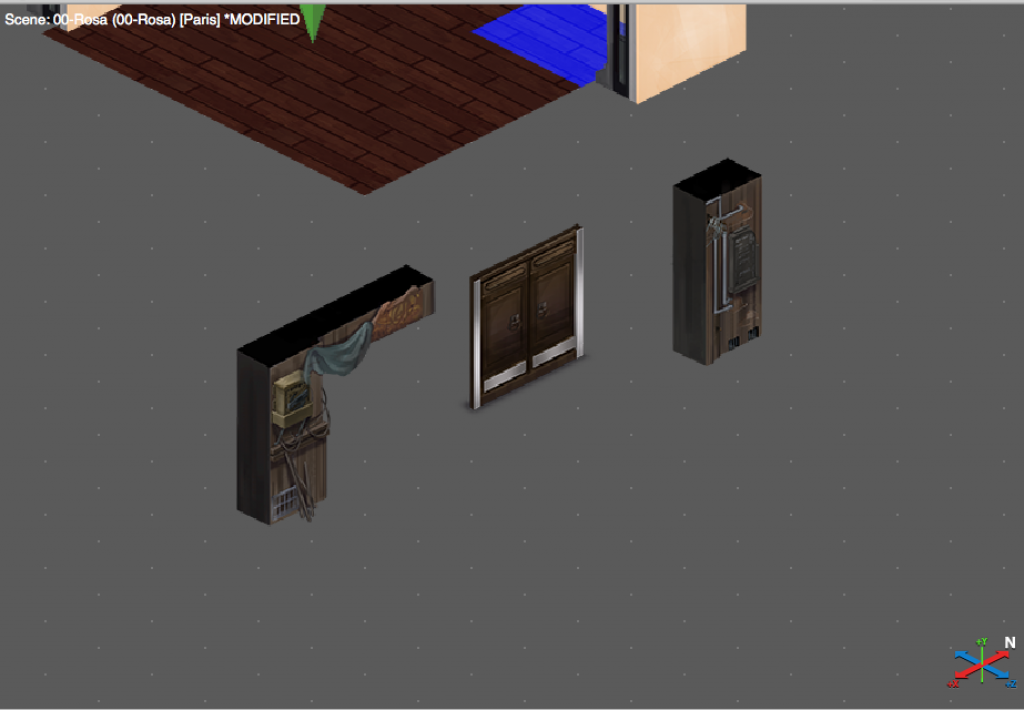 Doors come in sets and styles. Usually front and back bits match a wall design. The middle part of the door is easier to swap from different styles without it looking awkward. 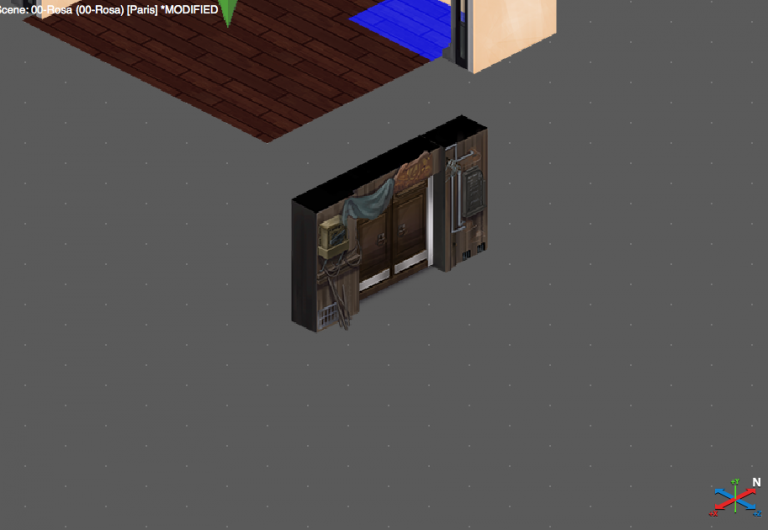 When you assemble all three pieces of a door, you get this result. This whole set can then be placed along a wall.

Adding an interaction to a door

The door is now closed. To add an interaction to open the door, select the middle part of the door, and look to the right of the interface. You should see a hammer icon in the top right corner of the properties tab. Click it to access the prop interactions editor” dialog.

The prop interaction editor looks as follows. The first drop down allows you to pick a type of interaction. In the cotnext of this tutorial, we’ll only look at the “Door” interaction (third from bottom of the list).

You can also read more about inspection, item pick up and scene transitions on this site. We’ll cover the other interactions later as they’re slightly more complex to use. 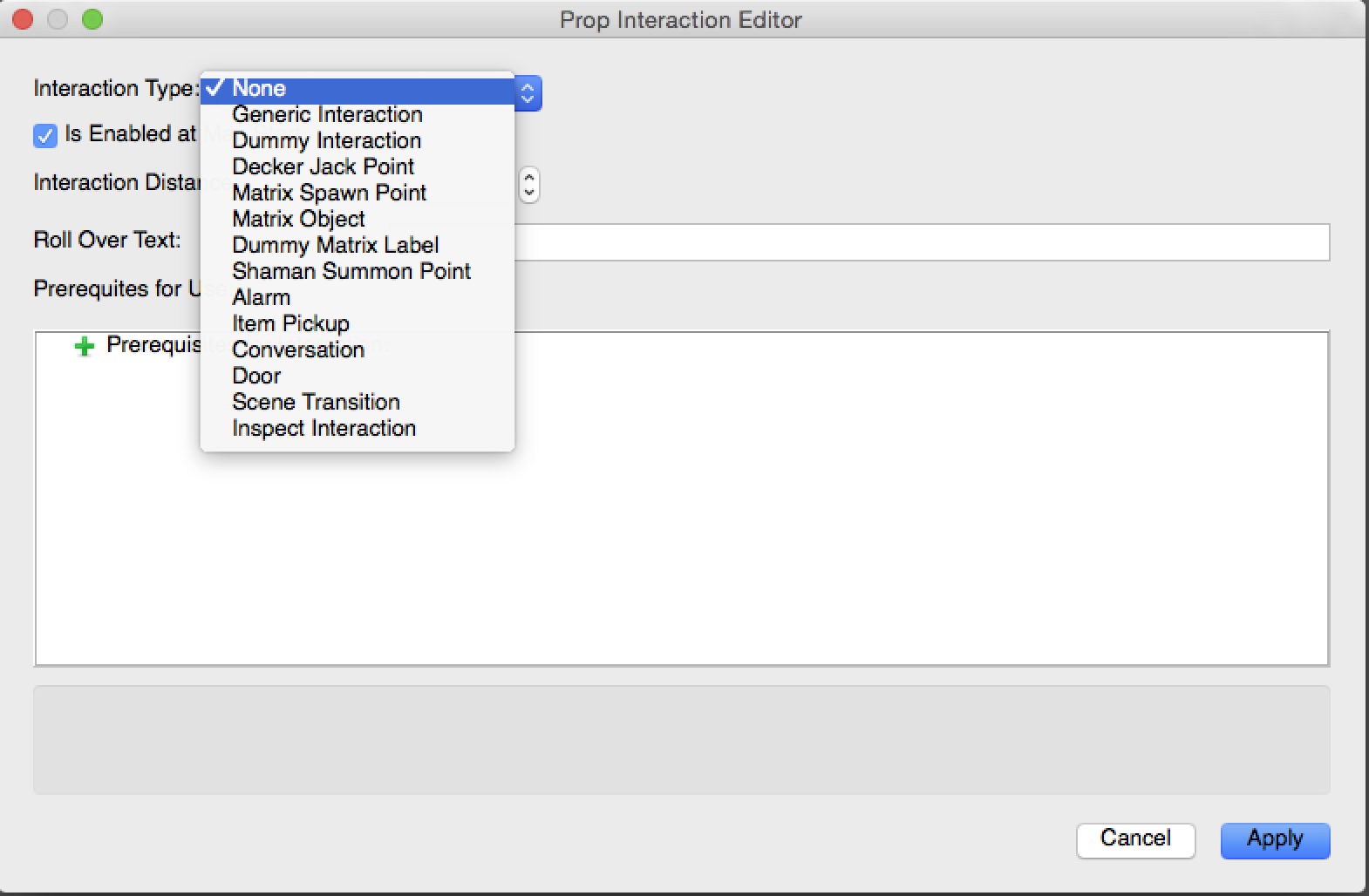 When you have selected door, you’ll see the specific options for the door below. First, the interaction distance and roll over text are common for any interaction.

Door roll over and interaction distance

“Roll over text” basically defines what is displayed above the prop when the player has their mouse over the prop. It can be convenient to tell the player where the door leads to or highlight if it bears any signs on it.

“Interaction distance” determines wether the player needs to walk towards the prop before interacting with it or not. Set to 1 by default, it means the player character needs to stand literraly against the door to be able to open it, which sounds like it makes sense. 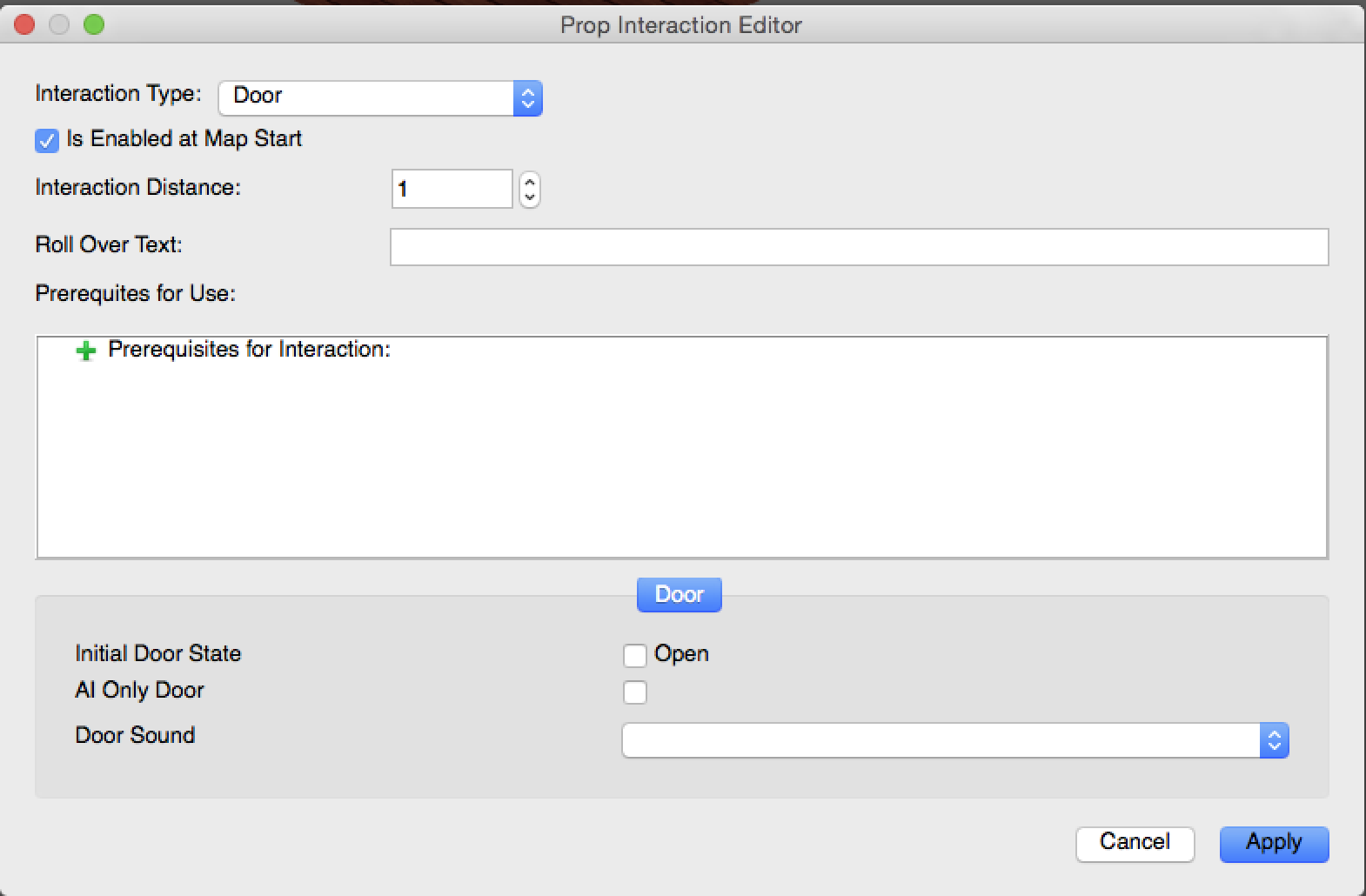 Locked doors and conditions or prerequisites

“Prerequisites” allows you to add conditions to be able to open the door. For example, you may only be able to open the door if you have the key. You could use this to check if the player has the key in their inventory and display the interaction only if they have it. If there is a condition on a door interaction, the default door icon will be replaced by a lock icon to make it clear for the player they can’t open the door yet. This is a bit different from other interactions where the icon would just not be displayed at all.

We’ll look into conditions more in depth in a later tutorial.

You can edit the sound a door makes when it opens or closes using the “Door Sound” drop down. Doors typically make a sound which helps convey the information the door opened, adds to the ambiance of the location and at the same time as tells the player that something has changed in the game.

The list of sounds can be very long, so it may be a bit of a hassle to find the doors in the list. In this screenshot, you can find there under HongKong:props/Door and chose from slide, swing, stone or rockslide. You may find more like elevator beeps, lock sounds and other more techy doors. 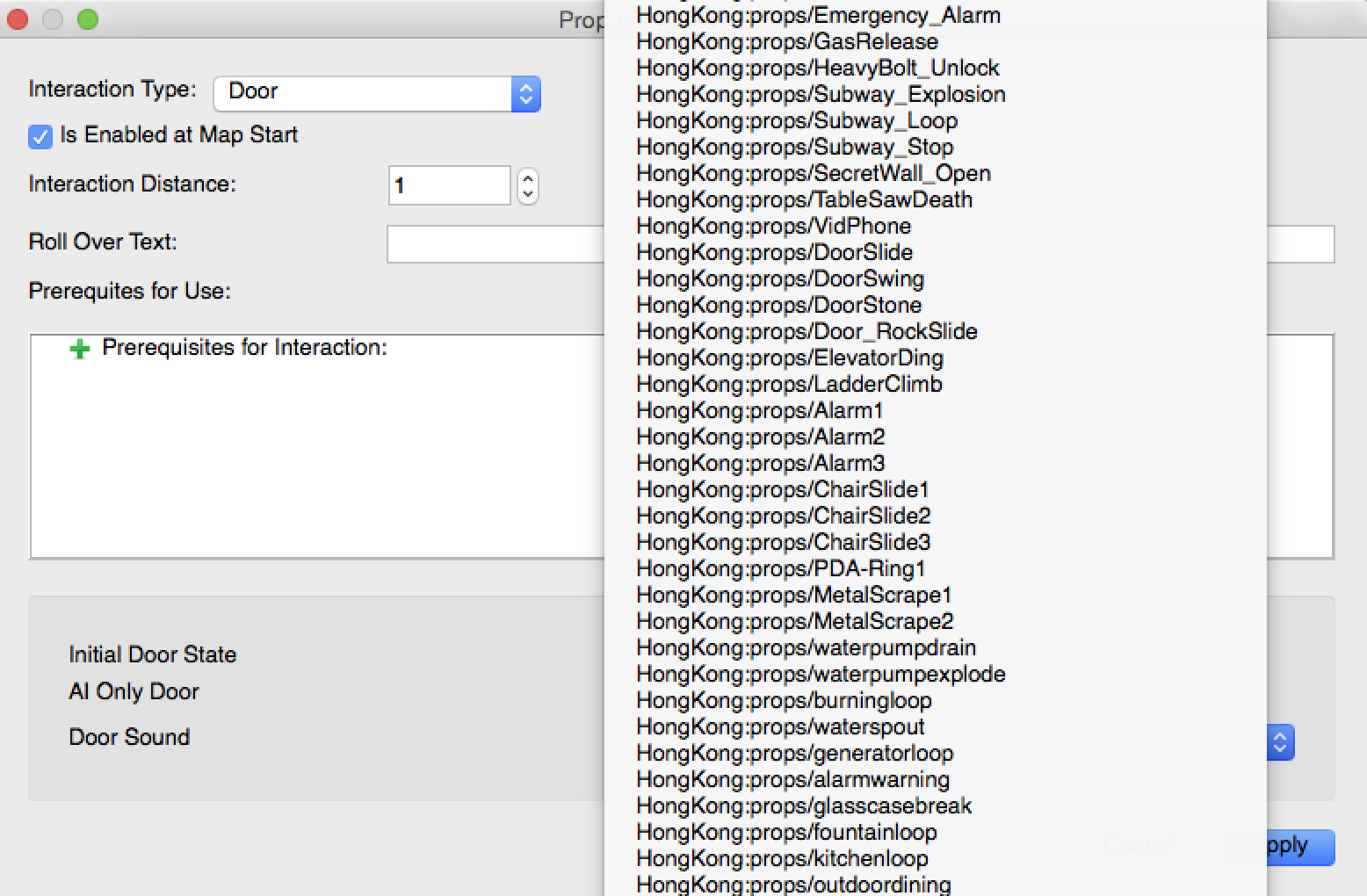 More options for door interactions : open from start and AI only doors

Just above the sound options, “Initial door state” allows you to define that the door is open from the start, but can be closed later on.

“AI Only Door” allows you to create doors that can be used by NPCs but not by players. Only the AI can walk through them. This is very convenient to have ennemies walk inside a room to corner the player. Like this, the player can’t walk into where the ennemies are posted before a fight. It can also be used to get civilians out of a combat area without giving the player the chance to pursue them or flee from the fight with them. 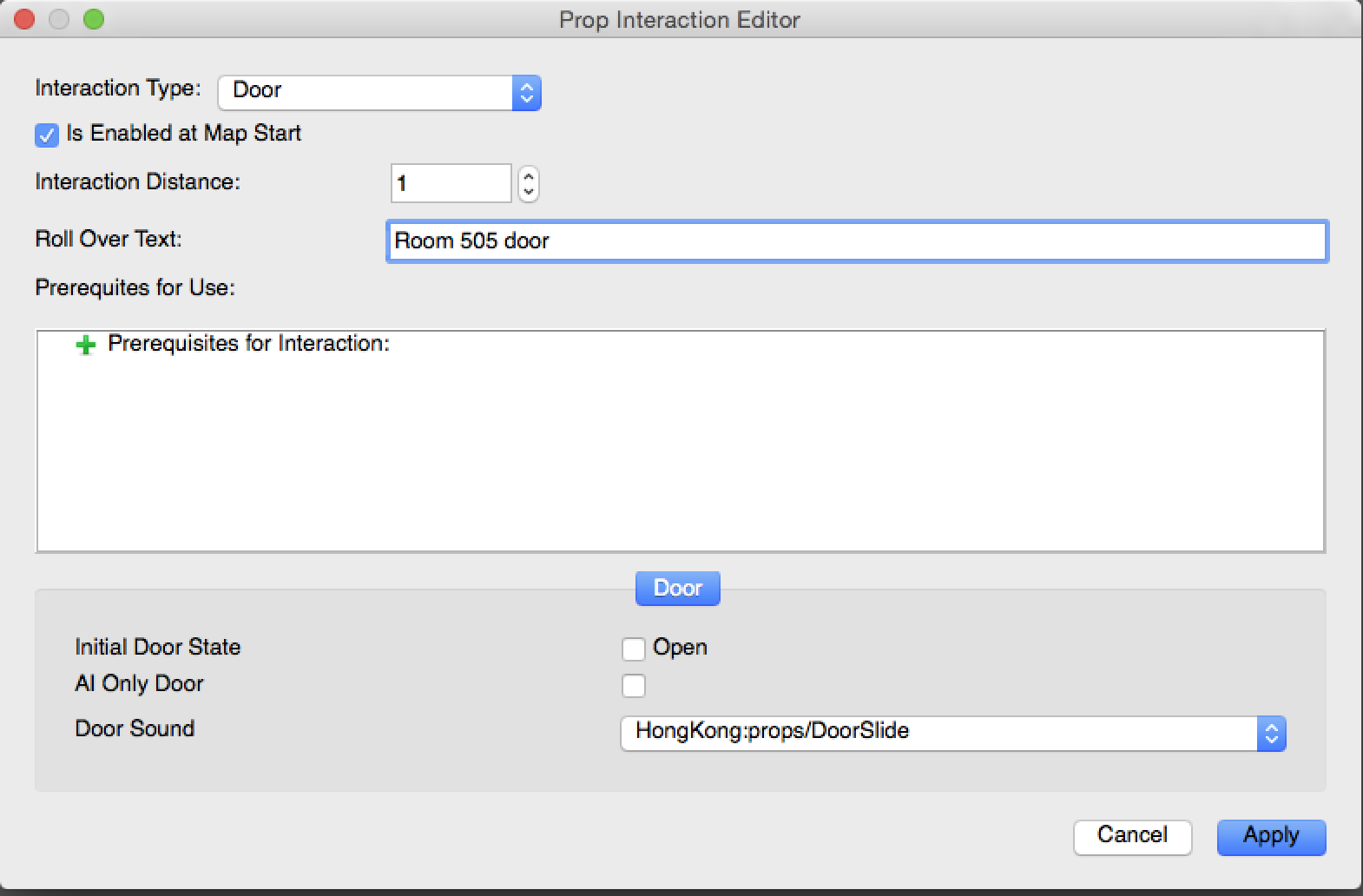 Once you are happy with all the settings, click Apply to close the dialog.

Confirm and test the interaction in game

How to confirm interactions exist on a prop in the editor

When the interaction is successfully added, you will see a yellow sign with an exclamation mark above the interactive prop. This confirms the prop is interactive. The sign might be hidden behind the front and back of the door, so you can see it by moving the middle part of the door to the front. Don’t for get to put it back before trying the level though ! 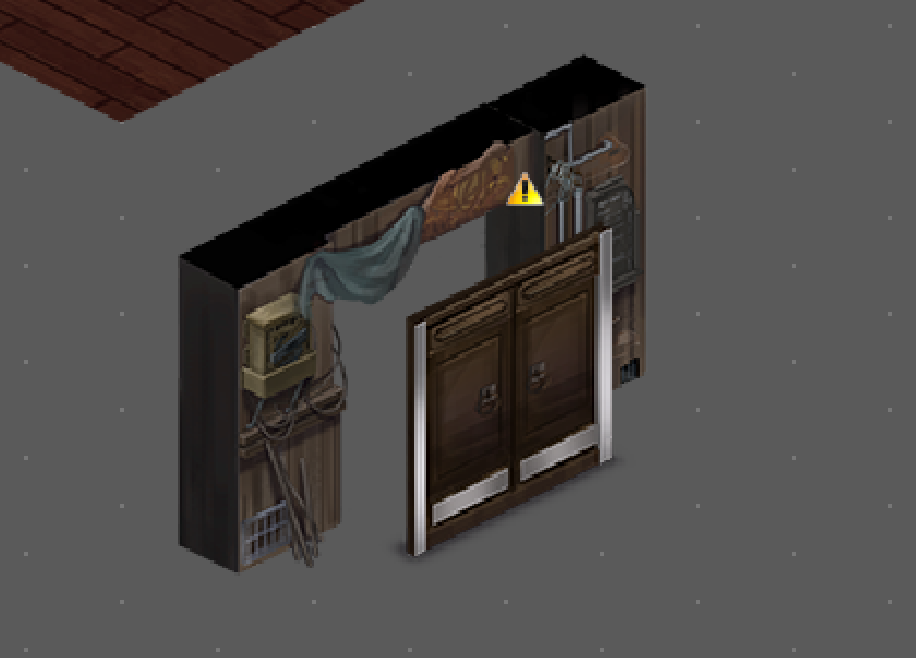 Run the game and open your new door

Now you can run the level and try out your door. When entering the map, the door should have a door icon on top of it. 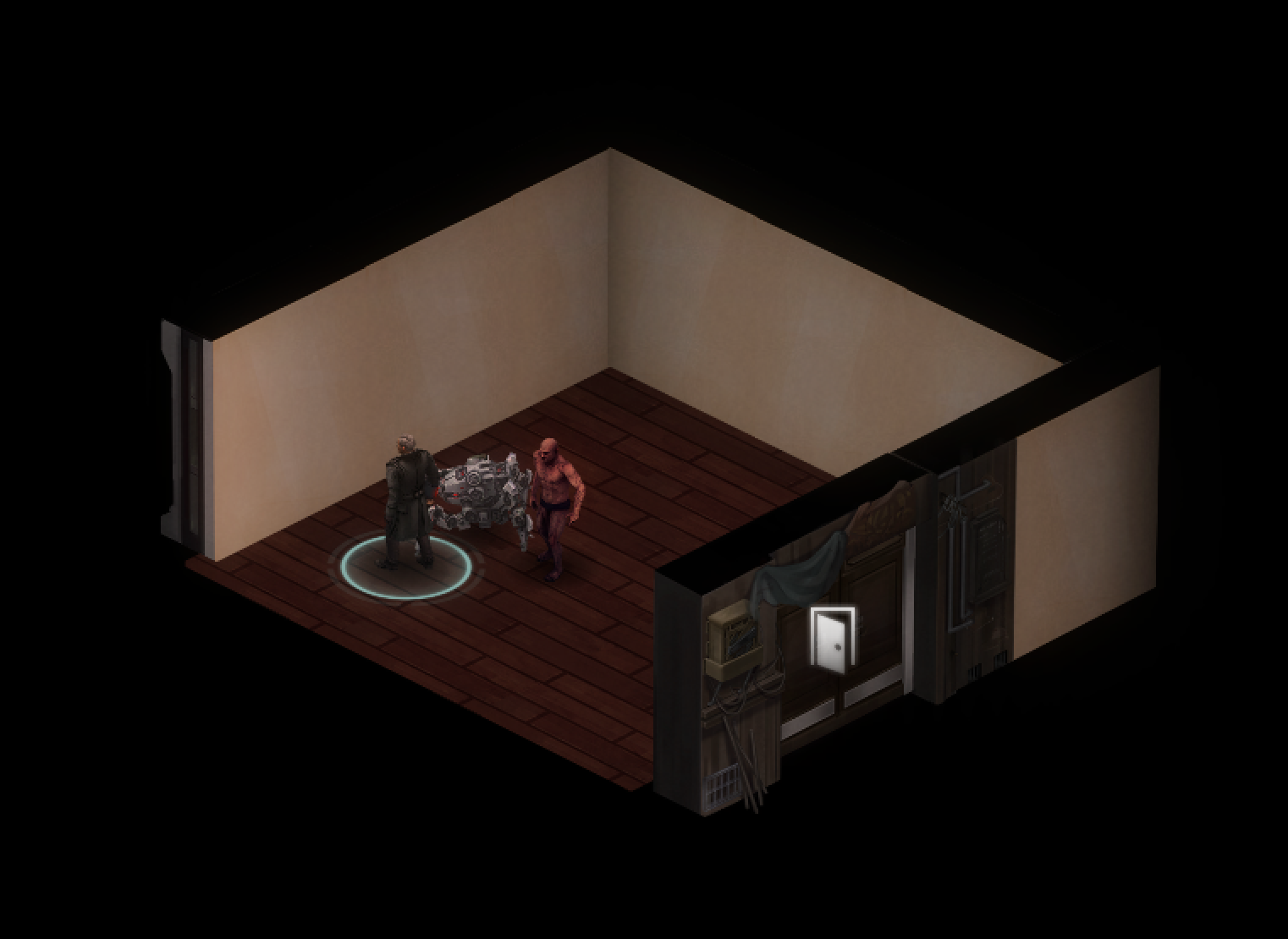 When you click the icon, the player character will walk towards the door and open it, revealing whatever is behind. 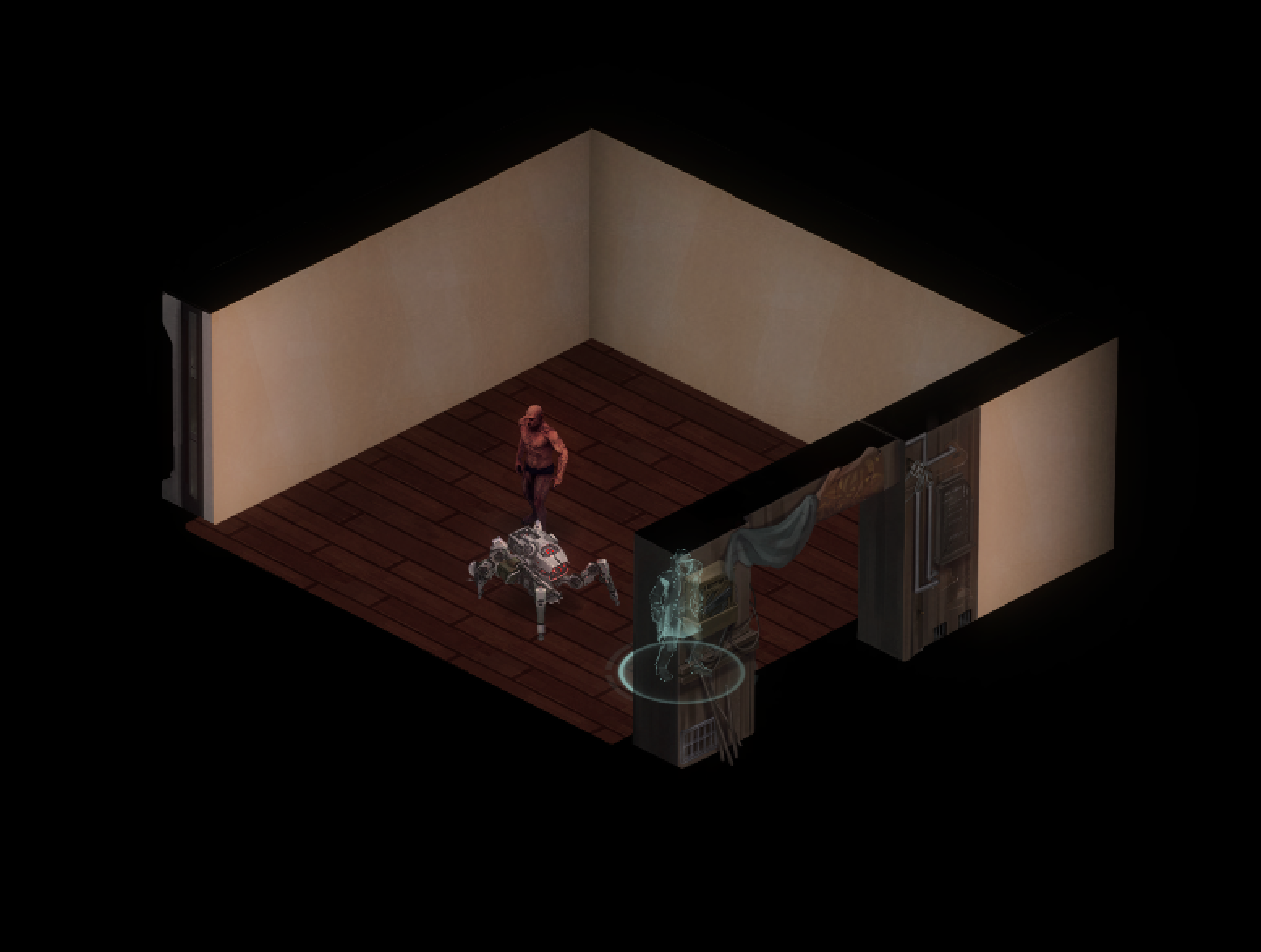 Now you need everything you need to know to make a level where the player can explore dark corners and be surprised by what is waiting for him behind each door. Have fun with it !

Trick question for you : How do you close a door again ?